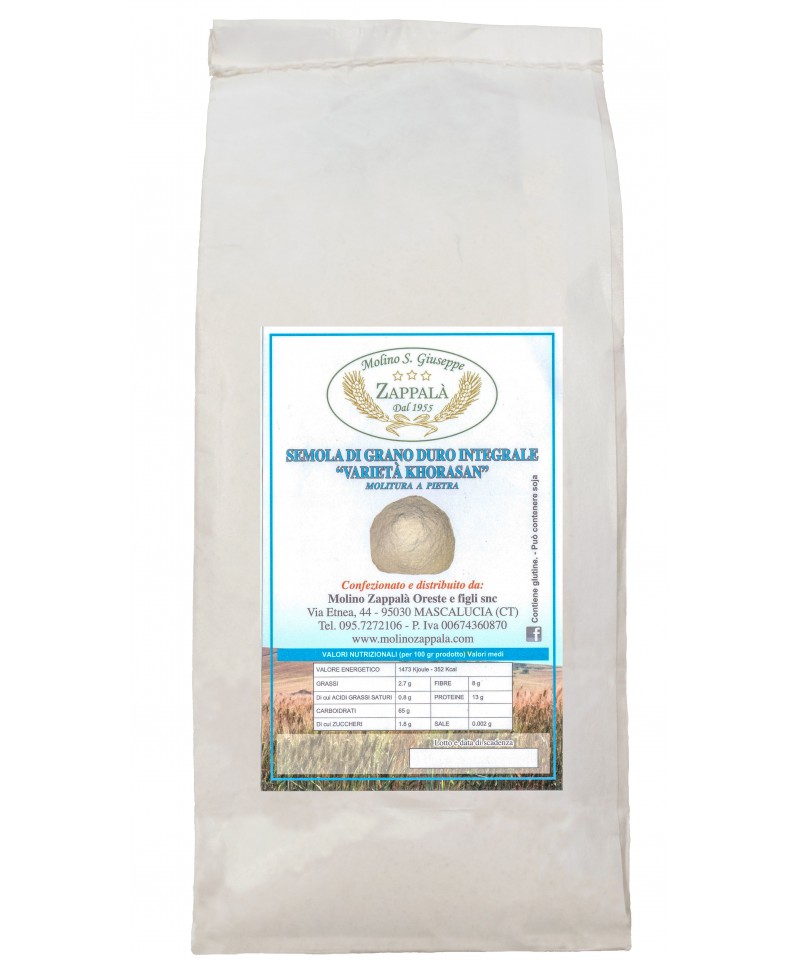 The great reputation that the khorasan has gained over time is mainly due to the growing number of food allergies; after long studies conducted in the Usa, it has been shown that approximately 70% of the people who can not tolerate traditional wheat due to allergic reactions, can safely consume the khorasan. The same guidelines do not apply, however, if you are celiac; the khorasan, in the same way of the grain, contains gluten and therefore can not be consumed by people intolerant to gluten. Much appreciated, in addition to the nutritional properties, its good digestibility and assimilability. To underline the presence of selenium, which, thanks to its antioxidant properties, is able to protect the body from the effects of the dreaded free radicals. A confirmation of the good nutritional properties, for every 100 grams of khorosan, we have a caloric intake equal to 335 calories.

The khorasan wheat is very rich in selenium, zinc and magnesium and also contains iron, phosphorus, calcium, potassium, and sodium. Among the vitamins present some of the B group: B1 (thiamine), B2 (riboflavin), B6 (pyridoxine); it also has a good amount of vitamin E (tocopherol). The concentration of amino acids is superior to that of traditional wheat, and it is, like other varieties of wheat, cholesterol-free;

Properties and beneficial effects of Kamut Kamut, belonging to the Triticum genus, is an ancient grain cultivated by the egyptian population, called Khorasan wheat, it is produced with organic cultivation in different parts of the world and patented by the american company "Kamut International." The Khorasan patented "Kamut" is definitely a product resulting from organic farming and, for this, free of pesticides or by-products from chemical fertilizers. Purchasing, therefore, the Khorasan wheat "Kamut" it has the assurance of a genuine product and that it still retains all the quality of the ancient wheat Khorasan, now like thousands of years ago, without genetic manipulation or the use of harmful products during the production. The Khorasan wheat "Kamut" (which from now on we will simply call "grain Kamut" as we will refer specifically to biologically produced) has the grains much larger than the normal grain, and is, therefore, called "giant grain". In the history is not much appreciated, he presented the dark periods until it was decided to focus on this product, in the idea of guaranteeing a Khorasan wheat definitely healthy. The grain Kamut is considered to be one of the cereals more complete from the nutritional point of view, most rich of protein and minerals than wheat: it has about 350 calories for 100 grams of product, 9% of water, 16 grams of protein, 69 grams of carbohydrates, 2 grams of fat and 7 grams of dietary fiber. The grain Kamut is very rich in selenium, zinc and magnesium and also contains iron, phosphorus, calcium, potassium, and sodium. Among the vitamins present some of the B group: B1 (thiamine), B2 (riboflavin), B6 (pyridoxine); it also has a good amount of vitamin E (tocopherol). The concentration of amino acids is superior to that of traditional wheat, and it is, like other varieties of wheat, cholesterol-free; wheat, Kamut contains gluten, then it is not a food suitable for coeliacs. It has a good digestibility and, in addition, having not been treated with pesticides and other allergenic substances, the grain Kamut can be tolerated by 70% of the population has allergic reactions to the traditional wheat; however, especially in cases of severe allergies, it is always advisable to consult the advice of a physician. It is energizing and then recommended in cases of asthenia. Among the beneficial properties are that closely linked to the richness in selenium and other minerals, which make the kamut in a food with antioxidant properties, can fight the damage due to free radicals and thus to delay the aging of cells; it also decreases the risk of formation of cancer, heart disease, is remineralising and it is a food recommended for all ages, in cases of anemia, stress and is also useful for the elderly. We have said that Kamut is also rich in zinc, another element is valuable because a antioxidant, essential for the functionality of our immune system, and cell growth, for the synthesis of proteins and for the view. The Kamut-brand wheat is found in grains but also flour, that are products of bread, pasta and other foods, both sweet and savoury.

of which saturates 0.8 g